Contrastive self-supervised learning techniques are a promising class of methods that build representations by learning to encode what makes two things similar or different.

The prophecy that self-supervised methods would replace the dominant direct supervision paradigm in deep learning has been around for quite some time. Alyosha Efros famously made a bet (the Gelato Bet) that an unsupervised method would beat a supervised R-CNN on Pascal VOC detection by Fall 2015. He would go on to lose the bet, but four years later, the prediction has been now been realized. Self-supervised methods now surpass their supervised counterparts at Pascal VOC detection (MoCo, He et al., 2019) and have shown great results at a lot of other tasks. The family of methods that have been behind this recent resurgence of self-supervised learning follow a paradigm called contrastive learning.

A large class of contemporary ML methods rely on human provided-labels or rewards as the only form of learning signal used during the training process. This over-reliance on direct-semantic supervision has several perils:

Self-Supervised Learning provides a promising alternative, where the data itself provides the supervision for a learning algorithm. In this post, I will try to give an overview of how contrastive methods differ from other self-supervised learning techniques, and go over some of the recent papers in this area. 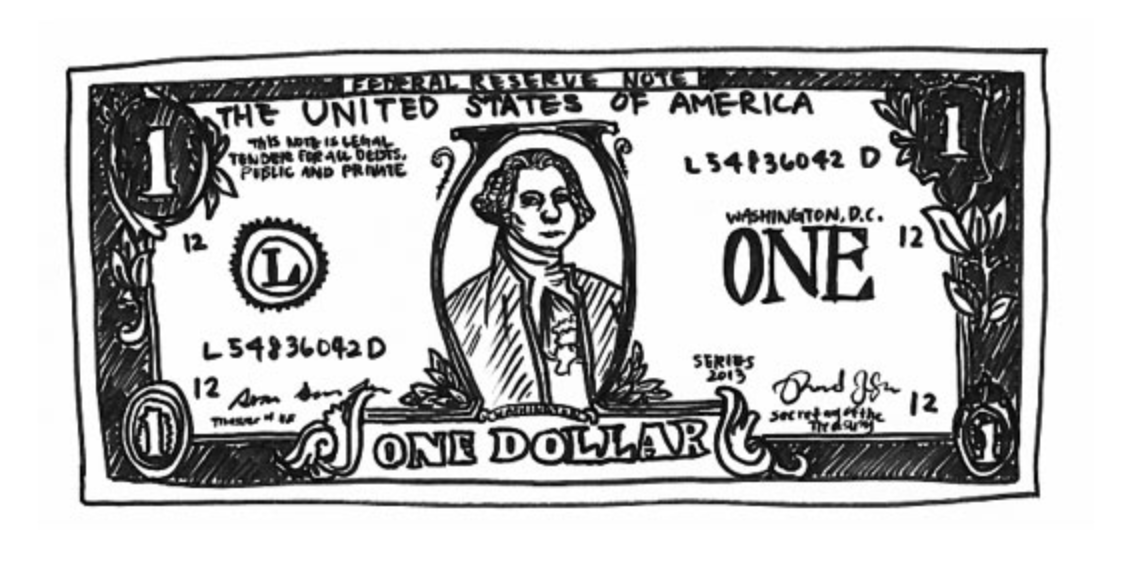 Consider this experiment conducted by Epstein, 2016 where subjects were asked to draw a picture of the dollar bill as detailed as possible.

Despite having seen a dollar bill countless number of times, we don’t retain a full representation of it. In fact, we really only retain enough features of the bill to distinguish it from other objects. Similarly, can we build representation learning algorithms that don’t concentrate on pixel-level details, and only encode high-level features sufficient enough to distinguish different objects?

Contemporary self-supervised learning methods can roughly be broken down into two classes of methods:

Contrastive methods, as the name implies, learn representations by contrasting positive and negative examples. Although not a new paradigm, they have led to great empirical success in computer vision tasks with unsupervised contrastive pre-training.

How do contrastive methods work?

More formally, for any data point $x$, contrastive methods aim to learn an encoder $f$ such that:

$x$ is commonly referred to as an “anchor” data point. To optimize for this property, we can construct a softmax classifier that classifies positive and negative samples correctly. This should encourage the score function to assign large values to positive examples and small values to negative examples:

The denominator terms consist of one positive, and $N-1$ negative samples. Here, we have used the dot product as the score function:

This is the familiar cross-entropy loss for an $N$-way softmax classifier, and commonly called the InfoNCE loss in the contrastive learning literature. It has been referred to as multi-class n-pair loss and ranking-based NCE in previous works.

The InfoNCE objective is also connected to mutual information. Specifically, minimizing the InfoNCE loss maximizes a lower bound on the mutual information between $f(X)$ and $f(X^+)$. See Poole et al., 2019 for a derivation and more details on this bound.

Let’s look at the different contrastive methods more closely to understand what they are doing: 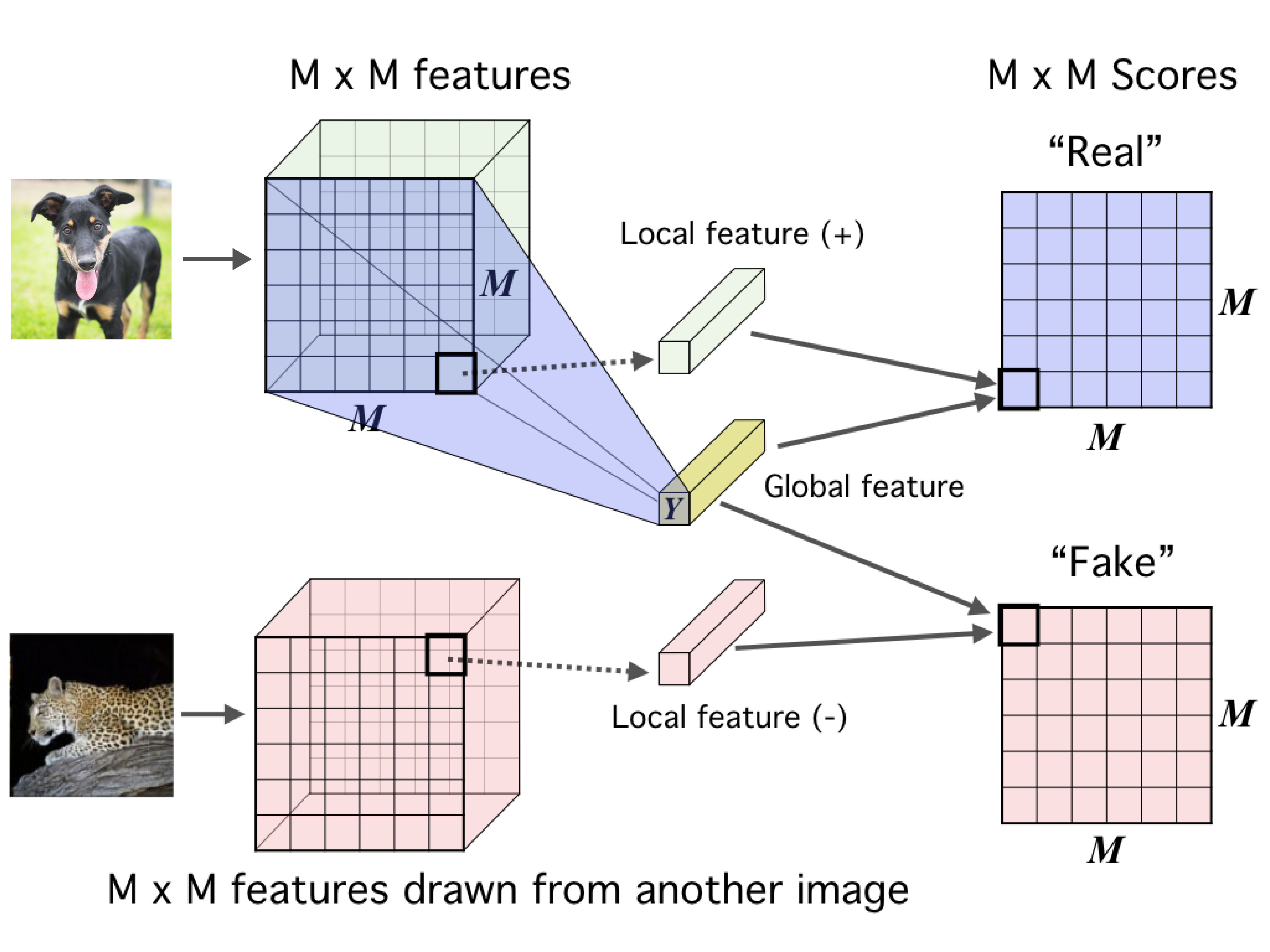 DIM has been extended to other domains such as graphs (Veličković et al., 2018), and RL environments (Anand et al., 2019). A follow-up to DIM, Augment Multiscale DIM (Bachman et al., 2019) now achieves a 68.4% Top-1 accuracy on ImageNet with unsupervised training when evaluated with the linear classification protocol.

Contrastive Predictive Coding (CPC, van den Oord et al., 2018) is a contrastive method that can be applied to any form of data that can be expressed in an ordered sequence: text, speech, video, even images (an image can be seen as a sequence of pixels or patches).

CPC learns representations by encoding information that’s shared across data points multiple time steps apart, discarding local information. These features are often called “slow features”: features that don’t change too quickly across time. Examples include identity of a speaker in an audio signal, an activity carried out in a video, an object in an image etc.

CPC makes use of multiple $k$s in a single task to capture features evolving at different time scales.

When computing the representation for $x_t$, we can use an autoregressive network that runs on top of the encoder network to encode the historical context.

Recent work (Hénaff et al., 2019) has scaled up CPC and achieved a 71.5 % top-1 accuracy when evaluated with linear classification on ImageNet.

Contrastive Learning provides an easy way to impose invariances in the representation space. Suppose we want a representation to be invariant to a transformation $T$ (for example crops, grayscaling), we can simply construct a contrastive objective where given an anchor data point $x$,

Several recent papers have used this and to great empirical successes:

Fig: Comparison of different strategies of using negative samples in contrastive methods. Here $x^q$ are positive examples, and $x^k$ are negative examples. Note that the gradient doesn’t flow back through the momentum encoder in MoCo. Image source: He et al., 2019

A generic paradigm for self-supervised learning

Even though most applications of contrastive learning in this post have focused on standard computer vision tasks, I hope it’s evident contrastive learning is a domain and task agnostic paradigm for self-supervised learning. It allows us to inject our prior knowledge about the structure in the data into the representation space. This means that as we move away from static iid datasets (which discard a lot of underlying structure in the data) and leverage additional structural information, we can build more powerful self-supervised methods.

Thanks to Brady Neal, Evan Racah, Max Schwarzer and Sherjil Ozair for reviewing earlier drafts of this post and providing valuable feedback.

If you found this blog post useful, please consider citing it as: